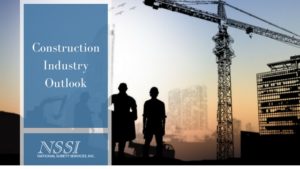 Unfortunately, while there was growth in 2017, it was disappointing and didn’t live up to expectations. Thus, the outlook for 2018 has been more moderated, and the estimations are less optimistic. Look at the construction industry outlook for 2018 and the factors going into the forecast, including moderating economic growth related to industry growth.

Again, in 2017 there was growth, but 2016’s 10%-plus growth has reduced to just under 7% in the first six months of 2017. Institutional spending was also far below the early-year expectations for growth. As a result, the consensus from the American Institute of Architects has been far more measured regarding the coming year.

The early enthusiasm for 2017 revolved around the idea that the Affordable Care Act would be repealed and replaced, thus lessening the financial burden on small businesses, that we would see financial deregulation and tax reform to bolster the corporate economy, and that there would be a trillion-dollar program for infrastructure over the ensuing decade that would directly benefit construction growth.

None of this has occurred. The economy has only seen roughly 2% growth, and Congress has continually failed to address the ACA. Consumer sentiment and corporate confidence are both down from where they were at the beginning of the year.

The AIA predicts that there will be a much slower growth across the construction industry through 2018. The commercial market is looking at an 8.8% increase, up slightly from initial forecasts. However, Industrial and institutional construction is expected to actually decline by nearly 7% next year, with a net growth of roughly 3.5%. Overall growth in spending is projected at about 3.6% next year, with commercial construction looking to increase by about 4%.

The up side of all of this is that the industry is expected to see growth across the board; it’s just not at the high optimistic levels that were held early in 2017.

There are a number of factors affecting this growth slowdown across the board. These include a slowdown in the economy, with much lower growth than originally anticipated; many concerns for the industry itself including building commodities and a shortage of skilled labor; and serious vulnerabilities in the retail, industrial, education and healthcare sectors. All of these are tying into the reduced forecast for next year, which could become more optimistic if the current administration manages to follow through with some of their promised reforms.

One factor that remains of utmost importance in the industry is the requirement for surety bonding services. As competition becomes stiffer in a period of slow growth, the right bonds can poise you to be far more competitive across the board. That’s where National Surety Services, Inc., comes into the picture. Read about what we do, and get in touch to get bonded today!