The Difference Between Performance, Payment, and Bid Bonds 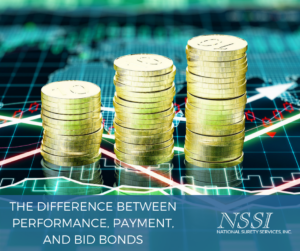 When talking about construction projects, three types of surety bonds get discussed most often: performance bonds, payment bonds, and bid bonds. All three can be critically important or even required in order for your construction company to successfully compete for a contract. All publicly funded contracts mandate at least two in particular — payment bonds and performance bonds.

So, in order for your construction company to advance from small, private contracts to compete on big commercial contracts, publicly funded contracts and long-term partnership agreements, it will need to have a firm grasp on the value of all three surety bond types.

Performance Bond — What It Is and How It Helps

When any of these conditions happens, the contractor will pay back the project owner to cover any losses in addition to the cost of replacing the contract with another company. A surety company is there to vet that the contractor can actually cover these expenses.

While a “money back guarantee” agreement like this would be standard practice in retail — “this coffee pot doesn’t work, so I want my money back plus return shipping costs” — things get more complicated in the construction world where contracts have lots of terms and lots of money is on the line.

Since a project owner is taking on a lot of risk, they will want proof that every penny of their costs will be covered if the contractor doesn’t render services as promised. Approval of a performance bond by a surety company shows that the money is there in case something goes wrong. It also shows that the contractor has their finances and reputation in good enough condition to get approved for a performance bond in the first place.

Payment Bond — What It Is and How It Helps

Payment bonds are similar to performance bonds in that they assure a project owner that a contractor will not cause them problems through unprofessional or unethical behavior. In this case, a payment bond ensures that the contractor won’t hire subcontractors or order materials from suppliers unless they have the money to actually pay for it.

Publicly or Federally funded projects are unique as a subcontractor or supplier is not able to lien the project, there for a payment bond is the only assurance to these vendors and the project owner that the General Contractor will honor their obligation.

Bid Bond — What It Is and How It Helps

Bid bonds are almost identical to performance bonds in that they ensure a contractor will stand behind their word when they start the project.

With a bid bond, the contractor is already guaranteeing that they will finish the project or cover the cost of replacement labor and any associated losses. Since bid bonds apply the moment someone places a bid, requiring bid bonds keeps contractors from submitting time-wasting bids that they will not follow through with.

What Types of Surety Bonding Do You Need? Performance, Payment or Bid Bonds?

The truth is that you are likely to need all three.

The Miller Act requires that all contractors trying to submit bids for federal contracts valued over $150,000 must have the total value of the project covered in performance bonds as well as all of their projected supplier and subcontractor costs covered by payment bonds. The moment that the value of either things increases, the value of the performance or payment bond must increase.

Many federally funded projects now also require bid bonds. Since all 50 states have passed “Little Miller Acts” of their own, state and municipal contracts will also require performance and payment bonds — and likely bid bonds, as well.

Companies in the private sector have copied these requirements, too, especially for contracts over $200,000 in value.

Before bidding on a project, your company will need to research what performance and payment bonds are needed and how much they should cover apiece. You may also need a bid bond in place before submitting your bid.

You can review your options for surety bonding or get help interpreting what surety bonding you need to bid on a certain contract by contacting us today. Call 800-953-6699 or contact us online.