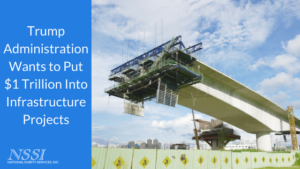 Echoing a campaign promise both sides of the aisle have gotten behind, President Trump reminded Congress of his plans to restore our nation’s infrastructure during his address a few weeks back.

“Crumbling infrastructure will be replaced with new roads, bridges, tunnels, airports and railways gleaming across our beautiful land,” Trump’s speech promised. “To launch our national rebuilding, I will be asking the Congress to approve legislation that produces a $1 trillion investment in the infrastructure of the United States — financed through both public and private capital — creating millions of new jobs.”

Hard numbers of the plan have yet to be disclosed to the public while it takes shape, but the National Governors Association has already begun to submit over 400 “shovel ready” projects for consideration. While we wait for more concrete details, contractors and construction firms can begin to anticipate all the foundation they will hopefully be pouring in the coming months.

“Crumbling Infrastructure” Is Real News and a Real Problem

According to a report card on our nation’s infrastructure assembled by the American Society of Civil Engineers, our nation is in a very bleak state. Overall, we score “D+” on the state of our infrastructure, which includes not just congested roads and deteriorating bridges but also dams, airports, waterways, public transit and a nearly all public utilities all in need of attention.

Bringing all of these areas up to acceptable standards could cost $4.6 trillion. Just looking at highway projects, a history of underfunding has created “a $836 billion backlog of highway and bridge capital needs,” the report states.

These structures service everyone from commuters to freight to people traveling, essentially keeping our economy going. In other words, unless some drastic spending is approved in the near future, repeats of harrowing incidents like the evacuations near the Oroville Dam in California would be the least of our worries. We will be held back from our full economic potential, leading to lost income, lost jobs and the type of constrained growth that creates serious recessions.

Hopefully, congress and the Trump administration can work together to solve these very real problems. In the short run, the projects associated with an infrastructure stimulus would create jobs and lucrative contracts under state and federal DOT as well as private investors. In the long run, improvements to infrastructure will allow our economy to keep pace with the explosive population growth and our demands on productivity.

Past efforts to improve infrastructure were stymied under the Obama administration, although a $305 billion continuing funding bill was eventually passed in 2015 after much debate from both parties in congress. Points of contention then included how to fund the bill and how to determine which projects get funding. Disagreement over these issues will no doubt continue to hamstring new infrastructure spending efforts, but with both Houses and the presidency united under one party, expectations are high that a deal can be struck among the various congressional camps.

Get DOT Bonding to Be a Part of the Infrastructure Plan

Assuming the $1 trillion infrastructure plan can fall into place, many lucrative public and private contracts will be up for grabs. Companies who wish to bid on these projects must have the proper bonding in place, though, including DOT bonding for construction and maintenance.

If your company wants to establish DOT-approved bonding or increase its aggregate bonding limit, it can work with an experienced surety company in the construction industry like National Surety. You can learn more about how we streamline the bonding approval process and help find you the surety bonding you need to increase your contract-earning potential when you contact us today.