Why Work with a Surety Agent Instead of a General Lines Insurance Agent? 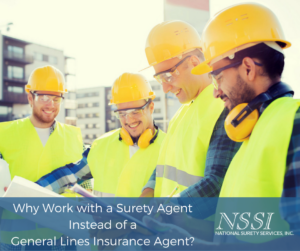 Lots of confusion surrounds surety bonding, including the fact that surety bonding services appear similar to general lines insurance. Because of this confusion, some contractors may wonder “Why can’t I just get insurance instead of surety bonding?”

The truth is that contractors likely needs both. All licensed contractors need some form of insurance in order to legally operate, including workers compensation and liability insurance. Laws like the Miller Act and states’ Little Miller Acts also require these contractors to secure performance bonds and payment bonds before they bid on a publicly funded contract, and many private companies have similar requirements.

To understand why your construction company probably needs both insurance and surety bonding, it helps to explain the difference between how the two work and what they aim to do.

How Most Insurance Works

Let’s say that Mr. Johnny Carpenter has an insurance policy with Pretend Insurance Co. against third-party injuries that result from Mr. Carpenter’s activities on the job. So, if pedestrian John Q. Hapless gets hit in the head by a pile of bricks while walking near the jobsite and Mr. Carpenter’s crew should have been watching the bricks, the insurance policy will cover all of Mr. Hapless’ medical costs and his associated costs of the injury.

Since Pretend Insurance Co. does not want to run out of money, they will have to make sure that the premiums they collect from Mr. Carpenter are likely to cover the costs of incidents that are likely to happen. If more incidents happen than Pretend Insurance anticipated, they will have to raise their premiums to cover the added risk. So, they are essentially on the hook for the costs of an incident, but they can make up those costs through premiums charged to Mr. Carpenter and to their other policyholders.

How Most Surety Bonding Works

The Big Difference Between Surety Bonding and Insurance

The biggest difference between insurance and surety bonding is that insurance claims are expected to eventually happen. No one can prevent freak accidents, and insurance companies also recognize that mistakes can happen from time to time.

Only after a bunch of claims happen will a contractor be seen as a high risk for their insurance company, meaning that the insurer will either ask the contractor for very high premiums or cancel their policy outright.

By contrast, surety bonding is something that should never have to be used. While small accidents and mistakes can lead to an insurance claim, a contractor would have to mess up pretty badly to make a project owner invoke the surety bond agreement. The contractor would have to mess up even more to put the surety in a situation where they had to pay back the project owner.

So why have surety bonds if you aren’t supposed to use them? Because they essentially work as a badge of approval. A surety company will look at a construction company’s assets, their past performance and their overall appearance of risk before they agree to back a surety bond for them. Contractors with a surety bond behind them basically say “you won’t have to worry about something happening because we are good enough to get approved by a surety company.”

Why You Need a Surety Agent

In sum, a contractor will need insurance to cover the things they cannot plan for and a surety agent to assist with finding a surety to serve as a guarantor for the things they can avoid. Many contracts available will require that you have both. Even if they do not, having both will ensure that your company can look competitive.

Learn how to secure surety bonding, how to increase your aggregate bond limit and how to interpret the amount of surety bonding you need for a contract by contacting us today. You can call us toll-free at 800-953-6699 or use our convenient online contact form below.